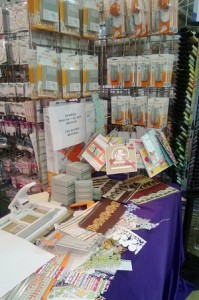 HAD SO MUCH FUN, THANK YOU HARROGATE =D

Hey Everyone, I’m back from Harrogate and a happy to be home, but it was great fun at the Great Northern Papercrafts Show. My workspace was a big mess, as per usual, but then again, what’s new?? We had some lovely samples, made my Kath and myself and even though I tried I didn’t get any more done while I was at the show. It was quite busy and to be honest, I spent a lot of time talking to the lovely people that came to stand instead. I thought that was a better choice.

Let me tell you, a huge lot of punched confetti was left behind for the cleaners, which, I’m sure they won’t be happy about as the AdvantEdge was put through its paces over the weekend. I met lots of guys’ n gals and, let’s say, my first visit will definitely be followed by a second later on in the year. I can’t wait.

I was exhausted by the long drive back but was so pleased that a fajita dinner was waiting for me when I got home. THANK YOU GIRLS!

Well, I suppose we will all be preparing for the HobbyCrafts show at the NEC later this week. Although, I am not sure yet, as I haven’t had the go ahead, there may be a surprise. I don’t want to say anything right now because I don’t want to disappoint, just in case. The AdvantEdge will definitely be there along with me and Rachel. Kath will be doing the Fiskars workshops, so it will be a fun four days.

Well, I’m going to sort out the washing and unpack now. So, until later.

2 thoughts on “Back and ready to go again”

What do you want to find?